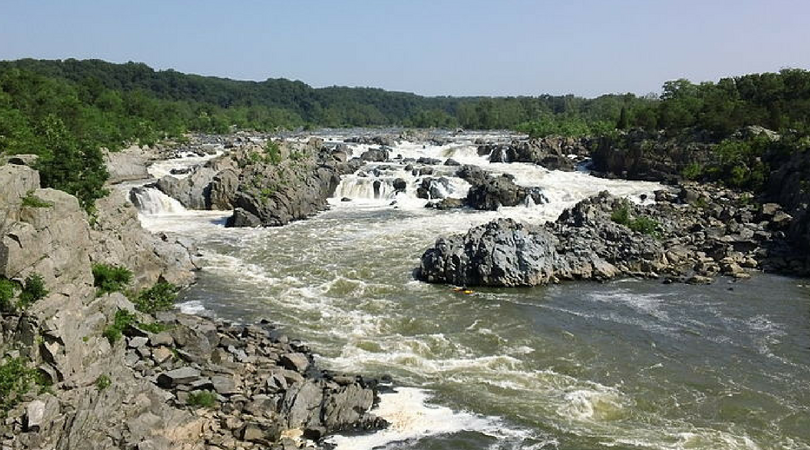 Well, this was a different and rewarding experience, and certainly an extreme day hike – flying from San Diego to Washington DC to walk 100km (62.5 miles for you metrically-challenged) along the Potomac River.  The walk (hike, race?), sponsored by the local Sierra Club chapter, started close to the Watergate complex (yes, that one) in the Georgetown section of Washington DC, and ended up many hours later a couple of states away at Harpers Ferry.

The route was the scenic and historical towpath of the C&O canal, which was used for transporting commerce many years ago. The historical towpath was originally created for mules to pull barges up the river. Today, however, it is an incredibly neat place to walk or ride bikes for many miles. Most people we saw that day were riding bikes. Wimps.

My hobby has been rigorous hiking (thus this site), usually up large elevations with trees and neat rocks along mountain trails (or canyon abysses) – hiking early, far, fast, light and getting back to a soft bed and indoor plumbing in the evening. So does this 100km fit the “extreme day hike” model? Oh, yes!  It all started January 2001, just before the Superbowl, when Carol, the publicity chairman of the Sierra Club in DC so kindly informed DayHiker.com (me) about their upcoming event – the 28th annual, one day hike, on May 5, 2001.

My initial reaction “yeah, right, sounds absolutely nuts … I couldn’t possibly do that”. Walking two marathons plus 10 miles sounded absolutely crazy. What am I? Forrest Gump? I started training within the week.

The Sierra Club proposed a training schedule for those in the DC area, which I simulated within the environs of San Diego. This was the key to a successful event.

So began a new venue for the extreme dayhiker: Walk from your home, walk early, walk when the newspaper is being delivered, walk early Sunday morning when cars are minimal, walk far, stop at McDonald’s for refreshments. Come back home to MY BED and a hot shower!   Wow, this does fit the model. No backpacks … carry nothing except a cell phone and credit card (taxi just a call away).

See some of the previous articles on this site, describing the 20 to 40 miles walkabouts in San Diego. It really opened my eyes to the fun of walking large distances from your own home. The lessons of how to avoid blisters and toughen up the feet were byproducts of seeing my hometown in a different light. Walking places you normally drive is not exactly Thoreau’s Walden Pond experience, but it’s close enough.

On to the hike itself. The hike started at 3am. They said be there by 2:30, so my gracious ride, Roger, picked me up in Alexandria at 2am.  My plan was to get up at 1:00 am to get ready. So being a clever planner I went to bed at 6 pm to get some sleep. Yeah, right. Ever try to do this? … force yourself to sleep when a big deal is about to happen? Doesn’t work. I knew that, but thought it was worth a try. OK, so zero sleep.

I “got up” (which implies I was “down”, which I never was) at 11:00 pm, read a book, ate a leisurely “breakfast”, shaved, showered, looked at the weather for the 94th time on the internet (in the 80’s with medium humidity), wrapped my feet like a mummy, put on sun screen (definitely planning ahead) and waited for my ride.

I was surprised only about 40 folks were there to partake in this 100km death march. Another 40 or so would start at 10:30am about halfway for the 50km version. We started out briskly, led by Paul, one of the organizers. He led us to and from a memorial bridge back to where we started near the Watergate so the 100km would measure correctly. Then we were on our own. I tried to keep up with the 8 folks who were in the lead. Two of them starting running and disappeared quickly. For the first 5 miles I would meet someone, chat a bit; they would pull ahead as I started conversing with someone else that caught up with me. Of course this was not a race in the normal sense (right … tell that to a guy) so it was fun meeting new people as they passed me.

Apparently the year before, it was very hot and a lot a people were unable to finish. Luckily, this year was not as hot , but still only 19 finished the 100km. This is a tough hike.

As I was moving along at mile 8 at what seemed like a good pace a fellow came abreast of me. I could tell in the sparsely lit night he was older than my young 57 years.   OK that was it – he is not going to pass me. Turns out Cliff is 71, has done the “race” (trust me, it was a race) many times before. Cliff and I walked together for about 45 miles, which is longer than I’ve walked with anyone in my life at one time. Of course being guys, we talked for about a total of 20 minutes.

Here’s the inspiration message for all you couch slugs. I was telling Cliff about my web site philosophy, which includes the phrase “do your personal best.” Somewhere in the decades of hiking miles, he says, “one year ago my personal best was 100 feet.” – the 100 feet being when he walked the hospital floor with an IV attached, fresh from colon cancer surgery. Hearing that was worth the plane trip. Cliff finished the race, again.

I met other people like the 30-something guy who had to bail out last year due to heat exhaustion, blisters, etc. He said, as he passed me at mile 6, he was going to do it this time. As he pulled ahead I wished him luck. Then, I saw him again at a rest stop around 40 miles. He was out again.

Roger, 63, a retired school superintendent, was the prototypical successful finisher. He trained per the suggested plan and paced himself well. Relatively new to athletic endeavors, he is a role model for those who think they are too old to do something rigorous. Good going, Roger.

The Sierra Club had this event organized to perfection: water, food, and paramedics at periodic rest stops. Very well done.

In summary, this is a hike you need to do if extreme day hiking is your thing. Come to Washington DC  in April, visit friends in the area, tour the sites, and do this walk.   All it takes is some preparation and the right mental attitude.  You won’t regret it.

I’m writing this article a month after returning from first 100k event. Why so late? Like any really difficult activity, time diminishes the painful parts and amplifies the positive aspects. Right after I finished the walk, doing this hike again,  was not a thought I cultivated.

We use cookies to ensure that we give you the best experience on our website. If you continue to use this site we will assume that you are happy with it.Ok