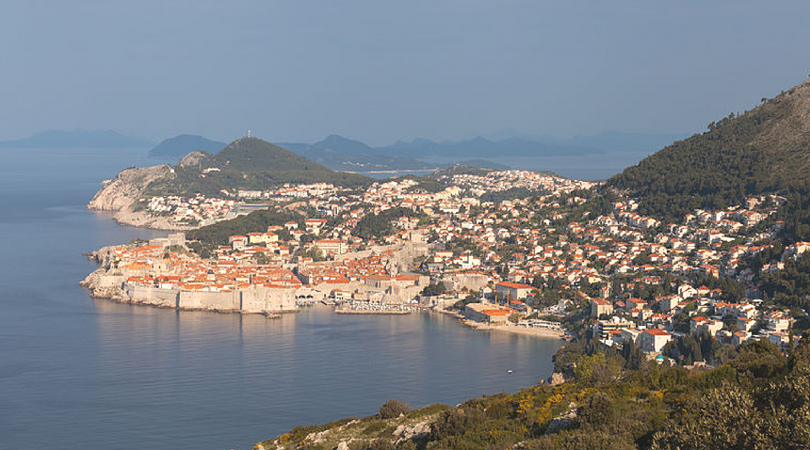 “Where are you hiking, I was asked a few years ago?”  I replied, “Croatia.”  I might as well have answered, “Phoebe” (one of Saturn’s moons), after hearing the next questions: “Why?” “Isn’t it dangerous,” and, “Where is that?”  Yes, the Balkans did have tragic times in the 1990’s, unwinding their pent up political and ethnic differences after the fall of Tito; and clearly, international travel is burdened with security concerns but not Croatia.

header image – Diego Delso [CC BY-SA 3.0 (https://creativecommons.org/licenses/by-sa/3.0)], from Wikimedia Commons Dubrovnik in southern Croatia, on the Adriatic Sea’s beautiful Dalmatian Coast (east of Italy) is safe.  It has the historical significance of Venice and a Greek island atmosphere without the mass tourism.  Known at the “Jewel of the Adriatic” its sister city could be La Jolla, CA.  Previously off the radar scope for most Americans, it’s it has been popular with Europeans.  Bernard Shaw who was quoted: “Those who seek paradise on Earth should come and see Dubrovnik.”

This web site focuses primarily on “extreme day hikes,” but also has the objective of finding hikes that are “exotic, entertaining, or otherwise unique.” – thus, these suggestions in and around Dubrovnik for day hiking.

The Walled Old City.  The landmark attraction of Dubrovnik is the fabled Old City surrounded by a 2 km of circuitous walking path high above the polished cobbled-stone streets, stores, apartments, ancient churches and other landmarks below. Walt Disney could not have design a better medieval theme park for folks to frolic late into the evening.

Walking the wall is fun walk, up and down stone steps, by a couple of fortresses, with views to the sea, the mountainside, the harbor, and a nearby castle – an hour well spent for the day hiker.  It’s not the Great Wall of China, but it is on of my top ten list of exotic day hikes to do.

The Serbs shelled the Old City in the early 1990’s but the damage has been repaired.  In fact, it’s hard to find any remaining evidence of the strife.  Interestingly, at one of the entrances a large graphic meticulously pinpoints each shell impact and the damage it caused.  Yes, a magical kingdom … no wonder the Serbs were bitter to see it go.

Napoleon’s Fort.  For a more rigorous adventure, hike up the switch-backed mountain trail (there was a cable car, but the Serb’s destroyed it in 1991) above Dubrovnik to the top of the old Fort, where a band of Croats held off the Serb’s for several months.   It’s about a 1300 ft elevation climb, brutal with the heat and humidity of summer – plan accordingly.  The panoramic view of the islands, Dubrovnik, and a small Bosnian village on the other side, makes this a worthwhile day hike.

Lapad Peninsula.  Just 2 miles north of the Old City is a peninsula composed of the wooded communities of Lapad and Babin Kuk.  The Gruz harbor is on east side and the Adriatic Sea on the west.  There is a pleasant walking path around the north end of the peninsula that passes by upscale hotels, ending up in Lapad at a crescent bay and a popular beach.  Take the tree-lined Zvonimira pedestrian-way back to the Gruz harbor.  Nestled in the trees along the path are laid-back bars and sidewalk restaurants, and a unique outdoor Internet café.  Stop and smell the pine trees.Lopud Island.  There are about 1000 islands off the coast of Croatia.  Lopud is representative, and the one hour ferryboat ride ($3) from Dubrovnik makes for a great day trip.  Lots of history here – in 1459 it became the governing center of Dubrovnik and was the summer destination spot for the elite because of its tranquility and charm. Today, this tranquility is evidenced by no cars – hand-pulled wooden carts seem to be adequate.

A network of hiking trails touch the 15th century ruins of a castle, churches and monasteries.  Have lunch at the idyllic Sunj beach – a very popular place for local Dubrovnik’s on the weekend because of its white sand, easy boat access, and skimpy swimsuit apparel.

Lokrum Island.  A 10-minute boat ride from the Old City brings you to this historic island.   Once a monastic community, gardens and buildings remain from their time. The monks left behind cats that now greet every arriving boat in great numbers.  A gentle day hike around the island, on paths laid out by the monks in the shade of the trees, is a pleasant way to pass an afternoon and provides another fine view of Dubrovnik.

Cavtat.  A 45 minutes bus drive south of Dubrovnik is this enchanting, quiet seaside town.  It offers the usual ranges of nice cafes, restaurants or hotels and has some nice walking trails along the water, with views northward to Dubrovnik.