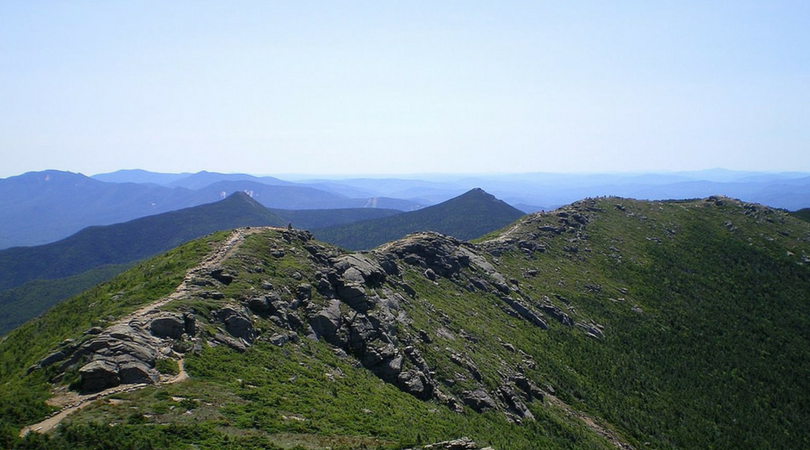 For a west coast hiker the quickest way to get a flavor of east coast hiking is to do all or part of the Presidential Traverse. New Hampshire, the “Granite State” with its motto, “Live Free or Die,” gives a hint about the trails. They are free from the structure of easy sloping switchbacks trails so familiar around Europe and the western U.S. The hikes are characterized by constant ups and downs and the pace is slow. The deciduous trees of the lower slopes often blanket a rugged trail of granite-lined ravines.   The alpine tundra above 5000 feet requires constant, but not difficult, bolder bounding on random granite paths marked by cairns.

The Crawford Notch divides the White Mountain range, a part of the Appalachian Mountains, into the Franconia Mountains and the Presidential Range. The highest point in the Franconia sub range (west of Crawford Notch) is Mount Lafayette (5242 ft). To the east of Crawford Notch is the Presidential Range, so called because many of the peaks are named for United States presidents. The highest summit in the range-and in New Hampshire-is Mount Washington (6288 ft). Other summits less than 6000ft are Mount Adams, Mount Jefferson, Mount Monroe, Mount Madison, and Mount Eisenhower.

A quick, but definitely rigorous one-day hike is a round trip from Pinkham Notch to the Mt Washington summit. DayHiker did this on June 24, 2001. Since the upper part of Tuckerman Ravine, famous for its winter ski debacles, was still closed, the 4000-foot hard ascent was made by the Lion Head Trail.  An 8am arrival at the spectacular summit found the parking lot and cafeteria empty.   A lone ranger (didn’t see Tonto or Silver) was beginning the day by raising the flag, as he awaited the hordes of people soon to be driving up.   An 8-mile toll-road is another way to get to the top … and you get a CD describing the drive and a bumper sticker memorializing the journey.

Moving on, a loop was made by hiking a mile down the Crawford Path (a part of the Appalachian Trail) to Lakes of the Clouds Hut where left-over, but still warm, pancakes made for a nice substitute to sport bars.  The descent back to lower Tuckerman Revine was made by way of Boott Spur Trail, another experience in steep, mild scrambling.

Excellent, tough, windy, Mt Washington has the moniker, “the World’s Worst Weather” due to its highest recorded wind in the world – 231mph in 1934. Also, the reputation is that this mountain makes its own weather so be careful. DayHiker was lucky … wind of only 30 mph and clear skies made for a delightful day.  The Ranger mentioned it is clear only 60 days of the year.   This was a great hike to experience a prominent mountain and east coast terrain. 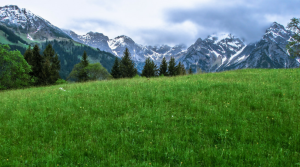 If the above hike is not enough for one day (8 hours was enough for me) try this one from a contributor to DayHiker.com.  He suggests a rigorous day in the Presidential traverse by stashing a bike at the west end of Crawford Path:

About 23.5 miles, 11 or so peaks, around 8500′ ascent, mix of good path at either end and a rock pile in the middle. Start by leaving a bike in the basement of Crawford Notch Hostel (AMC) the night before. Start at Appalachia parking area on Rt. 2, up Valley Way and Watson Path to Madison, past Madison Hut, up Airline or other routes to Adams, via Gulfside over Jefferson and Clay, up to Washington. Lunch, feet up. Then, down Crawford Path to Lakes of the Clouds Hut, over Monroe, Franklin, and Eisenhower, to Clinton. Down Webster-Jackson Trail to Mispah Hut, over Jackson and to Webster, then descend on Webster-Jackson Trail to Rt. 302 and the Crawford Hostel for dinner and good company. Some folks do this hike and skip most of the peaks, but it’s really not much harder to catch them all, and there are a few more minor named crags, which add about 45 minutes or so. Next morning, leisurely breakfast, then ride bike over Jefferson Notch Road to Rt. 302 and back to car, a moderate 25 mile ride and great way to return. Takes about 13 1/2 hours including stops, but this is not a hike for a novice.