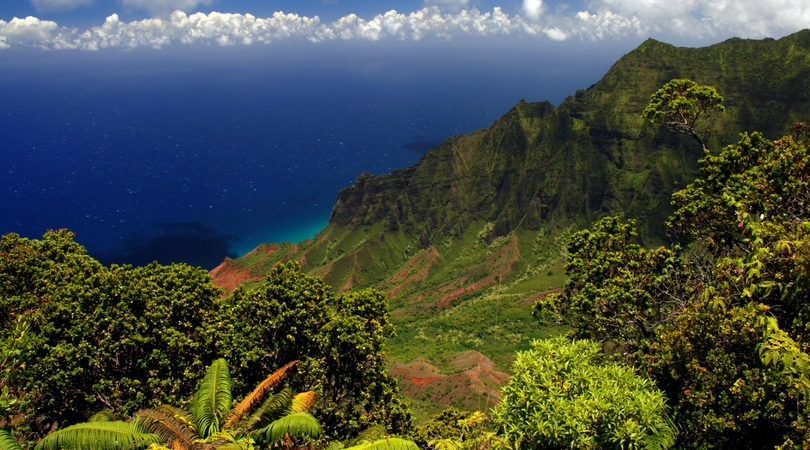 This hike is different, extreme as a day hike, and one of the best of the Hawaiian Islands.  The island of Kauai is known for its heavy rainfall, panoramic views, tropical forest and rugged coastline.  This 11-mile Kalalau Trail (one-way) follows the Na Pali Coast with its incredible views of five lush valleys, waterfalls, and ancient Hawaiian ruins.

Most day hikers go from the trailhead at Ke’e Beach to Hanakapiai Beach (2 miles) and then another 2 miles inland to Hanakpiai Falls, and return.  Or, backpackers stay on the coast for 11 miles and camp at the Kalalau beach.  Not many have done the complete round trip in one day.  This writer, the Day Hiker, went about half way July 1999 due to a late start, but would like to do the whole 22 miles in the future. 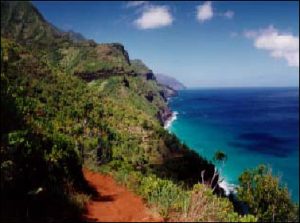 What makes this hike different, in addition to the natural beauty, is the trail which can be wet and tricky.  While you won’t have a problem with high altitude, tree  roots, slippery rocks, and the repetitive up 400′ down 400′, make for a challenging hike.

It is possible to take a Zodiac (rubber boat) from a commercial operator one way to/from Hanelai to Kalalau Beach.  Check with local providers. So with the right planning one could do the “day hike” one way and still be back that night in comfortable bed, avoiding mosquitoes, and using indoor plumbing.

And, like other hikes described on this site, maybe this strenuous activity will result in increased brain neurons which will cause less cognitive decline like in  Alzheimer’s disease.

The following article by David Wonderly, a DayHiker contributer,  describes a one day round trip.

THE NA PALI COAST TRAIL ON A TIME BUDGET

We were lucky. Three of us, John, Eric and I, went to Kauai in February 93 on a work trip. All expenses paid. It sounded great and it was great. Three weeks on the garden island, but only a few days without working to see and experience all that Kauai has to offer. We didn’t know much about Kauai when we arrived, and I had never even heard about the Na Pali coast, so on our first day off we went kayaking in the morning, and mountain biking in the afternoon. Some time during our stay we heard about the ancient Na Pali trail, and decided that we had to see it for ourselves.

We started asking around and the more people that we talked to the more we began to wonder if it was even possible to hike all the way to the beach and back the same day. Most people said we were crazy, and some went so far to say that if we even tried we would probably die. This only made us more determined to at least would give it our best shot.

At last our day off work came, a Sunday morning. We had worked 75 hours in the previous six days so we didn’t really get an early start. However by 8:00 am we were finishing breakfast in a nice cafï¿½ near the trailhead. The waitress gave us yet another warning about the dangers of Na Pali, and the dangerous surf at Kalalau Beach.

We weren’t totally ignorant of the stresses of a big hike on a hot tropical day, so we took about a gallon and a half of water each planning to stash some of it along the rail for the return trip. We also figured we would have to go rather fast if we wanted to get out alive.

We hit the trail about 8:30 walking fast with a strong sense of urgency and a certain amount of trepidation. The trail starts up immediately and after climbing three or four hundred feet it goes back down. This pattern was repeated over and over. Our fast walk soon turned into jogging on the downhills and the mile markers started going past. A few miles in we passed some guys who were pig hunting. They didn’t seem too friendly so we pushed on. Sometimes the trail would be in dense jungle other times it would open up with heartstopping views over cliff edges and down to the waves hundreds of feet below. Usually at those spots the trail would be narrow resembling a goat trail more than a hiking trail. We were blessed with a wonderful day, clear skies with a blustery wind off the amazingly blue ocean. However the sun was intense and we were glad to have lots of water. After about one and half-hours, we were near the six-mile mark where we stashed part of our water for the return trip. We were making good time and by now knew that we would be able to make it in reasonable time. Ridge after ridge, through drainage after drainage, we were soon on the last descent to Kalalau Beach.

What a beautiful place! A lone beach bordered by impassable cliffs that look more like a vertical jungle than any cliff I had ever seen. Water falls and runnels draining the upper reaches of the island cascaded down everywhere. Being winter on the north shore, the waves were huge. The waitress at the cafï¿½ was right, the ocean here dominates everything. We were afraid to even get in the water because the rip tide was running west faster than we could run. If you were to get in the water past thigh level you would likely get knocked off your feet and swept west past the end of the beach. If that happened you would have to swim all the way around the island before you could find a place to get out of the water. Resting in the shade eating some lunch and napping to the sound of endless waves crashing over the reefs, we felt very privileged to be there.

We spent an hour and a half hanging out on the beach before starting the long hike back. Walking along, I was thinking about the ancient peoples that created and used this trail. It makes one wonder who had it better, the people who walked this trail out of necessity, or us who were hurrying back so that we could return to work the next day? By 4:30 we were back at the car, it had been a very rewarding day. The lesson learned is to not let others fears and limitations stop you from searching to find your own.